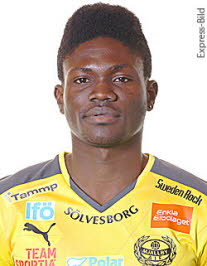 Kwame Bonsu, a Ghanaian football player in the Sweden second division was sentenced to two years in prison for allegedly beating and raping his wife. The wife, a Swedish citizen who they first met in the year 2014 and got married the following year said the beating started in November 2015 in their apartment when he refused to let her out one evening but Bonsu repeatedly denied the charges but testimonies from the wife’s relatives and friends led the court to believe the victim’s version of the event. The Swedish court has ruled that after serving his sentence, the 22 years who played for the Gefle IF club will be expelled from the country where he had lived since 2013, the Gavle district court ruled. His club, Gefle has also dismissed Bonsu from the team following the incident with immediate effect, he will also have to pay the sum of 245,000 kronor (25,000 euros, $28,000) compensation to the wife.
Post a Comment
Read more

Tribalism in Nigeria is the oldest score among the numerous ethnic groups in the country and the fit of who is the superior is also agelong battle. If the Arewa youth are giving their Igbo brothers ultimatum to leave the northern region by October 1, then something has to be done about that. A kind of arrangement has to be brought to the table, some kind of tap dance has to be organized between the Igbos and the Hausas. The wounds from the Nigeria-Biafra civil war is still very fresh and the post war affairs that were arranged further the hatred shared amongst  the ethnic groups involved. Nigeria is the most united and strongest country in Africa and history will not repeat itself,  the advocating for war by some youths are just the lashing out of pains of the marginalization caused by the mismanagement of leaders of the country.  The united Nations has called on different ethnic tribes and groups in Nigeria to be more tolerant to ensure unity and peace in the country The unite
Post a Comment
Read more
More posts