NEWS: DOCTORS PROTESTS AS KIDNAPPERS ABDUCTS ANOTHER DOCTOR IN CALABAR 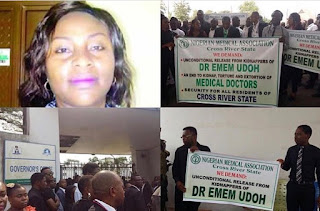 The doctors in Calabar have set up a mass protest as another colleague of theirs has been abducted again, this happened barely two days after another medical practitioner with the Cross River State College Of Education Medical Centre in the Akamkpa LGC, Dr Usang Ekanem was released following the his abduction in December 26, 2017. The recent abduction of Dr. Emem Udoh, a Senior Registrar in the Department of Paediatrics, University of Calabar Teaching Hospital who was abducted on Monday by unknown gun men while on duty, has raised an eyebrow of concern and the medical practitioners in the state has mount a protest to stop the illicit act and for the state government to interfere in the matter. There are signs that this recurring events might force the members of the state chapter of the Nigeria Medical Association to embark on an indefinite strike starting today Wednesday 10 Jan 2018 if due actions are not taken. The Public Relations Officer of the state branch of NWA, Dr. Ern
Post a Comment
Read more
More posts