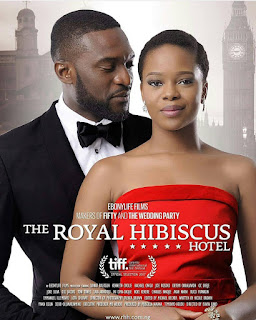 The producer of "Fifty and The Wedding Party" is here again with another romantic comedy drama featuring Zainab Balogun as leading female character. Zainab Balogun will be making her debut as the leading female character on the big screen with the @ebonylifefilms romantic comedy, Royal Hibiscus Hotel at the Toronto International Film Festival 2017. Watching out for this blooming beauty.
Post a Comment
Read more 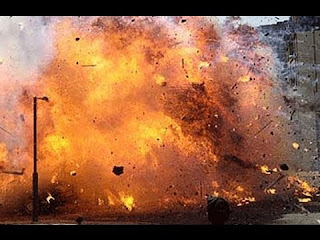 A female suicide bomber attacked a market place in Konduga in Borno state killing at least 27 people and 80 people in serious casualty early this evening. The said female bomber disguised herself as a buyer, found her way into the midst of the crowd at the market place and detonated the strapped bomb on her. The security authorities have taken control of the perimeter while efforts are being made to transport the injured victims to the hospital as well as the dead bodies. Watch this space for updates.
1 comment
Read more

NEWS: OONI OF IFE REACT TO THE ALLEGED CRASHED OF HIS 17 MONTHS OLD MARRIAGE 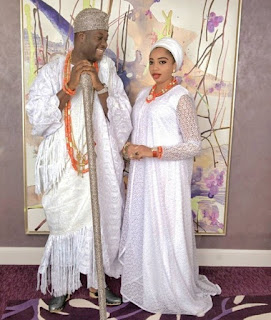 The news of Ooni of Ife's marriage to Olori Wuraola has been making rounds in the social for couple of days now and all sort of alleged crash of the royal  marriage has graces pages of newspaper and electronic media. The Ooni of Ife, Oba Adeyeye Enitan Ogunsi has publicly dismissed all rumours regarding the alleged crashed of his 17 months old marriage. In a recent chat with NAIJ.com the Ooni said he and his beautiful wife are happy and still very much married. The media aid of the King has issued a statement saying that,  “There is no truth to the news, it is unimaginable. We would issue a statement on the matter soon. The palace is not interested in this rumour as there are lots of positive activities happening every minute so we don't have time to respond to such noise being created by nonentities."
Post a Comment
Read more 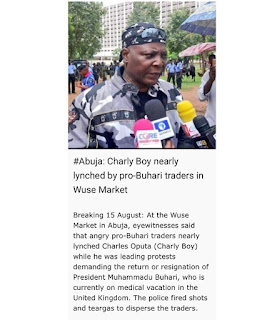 Earlier today, report came in that Charly Boy who is the frontliner for the #OurMumuDonDo protest calling for resignation or return of President Buhari was attacked by traders at Wuse market in Abuja. Eyewitnesses at the scene of the incident, alleged that the protest generated into ethnic conflict as the Hausas and Igbos started attacking each other at Wuse market, Abuja. PDP’s former Youth leader, Deji Adeyanju tweeted, “We just went to Wuse market for mobilization against 100 days event tomorrow & a regular face at Unity Fountain brought thugs to attack us.” “Charly Boy came to this market with some cameramen doing his protest here. I was standing in front of my shop when I saw him running for his dear life, being chased by those youth,” a trader at the market said. “They nearly lynched him, because those youth almost overpowered police security near him.” The Areafada was later rescued from the claws of the agitators by security operatives who fired gunshots
Post a Comment
Read more

NEWS: GHASTLY ACCIDENT THAT GOT MANY PEOPLE BURNT TO DEATH IN ANAMBRA STATE 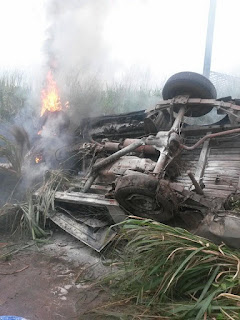 A Facebook user with the name Sunday Charles shared these heartbreaking photos on his timeline of a ghastly accident that burnt the passengers to death yesterday morning at Ihiala, in Anambra state. According to report, the unfortunate accident was caused by overload of the vehicle with varieties of goods. The photos are very graphic, see more photos below.
Post a Comment
Read more 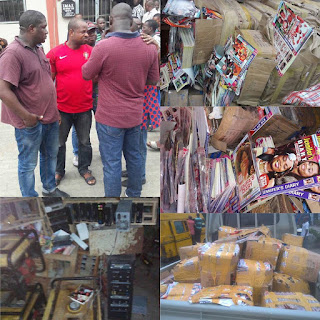 One of the biggest challenges in the film and music industry is the piracy business and all efforts by the National Film and Videos Censors Board (NFVCB) to tackle this menace is taking a positive toll. Early Monday morning, three men suspected to be pirates of film and music work were arrested at Alaba International market in a raid carried out by the newly inaugurated task force on uncensored and unclassified movies by the National Film and Videos Censors Board. The raid that led to the arrest was headed by notable marketer and member of the task force, Mr Gabriel Okoye aka Igwe Gobosky, took place at the popular Alaba market, leading to the seizure and confiscation of films and replicating machines  worth over 50 million naira. The suspects are presently in custody of the area E police station, Festac Town, Lagos, where they are being interrogated. Some of the movies seized include titles of newly released movies such as, Wedding party, Ayamma, 3 wise men, 30 days in Atlanta
Post a Comment
Read more

NEWS: ONE OF THE CORPERS TRAPPED IN IMO COLLAPSED BUILDING DIES DAYS AFTER 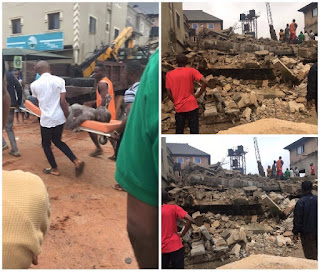 One of the two corp members who went into coma after being trapped in the collapsed building in Imo state, for eight hours has died. Chinedu Isiogugu, who is originally from Anambra state, died of cardiac arrest on Monday around 3AM after successful surgery was performed on his damaged two legs. He was 26 years old and his dead brings the casualty figure from the accident to five, after two babies and two adults were reportedly dead on Sunday. A source at the hospital where he was taken in and died reported that his female counterpart survived and in stable condition. Source says: - “We lost the male corps member around 3am on Monday. It was painful because a team of eight medical experts battled for hours to save his life. “We were happy that the surgery was successful, but he developed cardiac arrest and died moments later. “The female corps member is getting better, though she is in pains right now. We don’t want to tell her that her colleague is dead because that c
Post a Comment
Read more

ENTERTAINMENT: DAYS AFTER THEIR WEDDING, STEPHANIE COKER GOT THE LOVE INK ON HER BODY 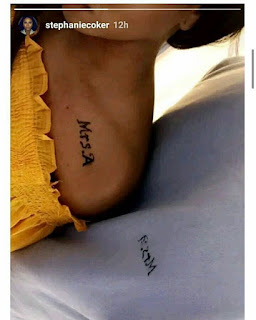 Love can make you do crazy things especially when the feeling is mutual, days after their fairytale wedding on the island of Greece, Stephanie Coker took the plunge and got the initial of husband's surname, Aderinokun tattooed on her body. One more photo after the cut.
Post a Comment
Read more

ENTERTAINMENT: JON SNOW AND DAENERYS TARGAARYEN ARE JUST CUTE TOGETHER IN REAL LIFE 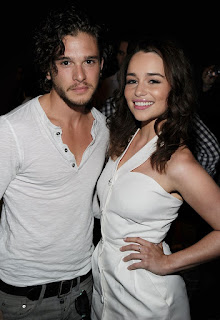 The chemistry between Jon Snow and Khalessi is one things fans of GoT can't turn a blind eye to and they are wishing that something could happen between them in real life. But the two, Kit Harington and Emilia Clarke have been photographed together at several events over the past few years along with Kit's girlfriend, former castmate, Rose Leslie. Meanwhile, fans are excited about the new episodes of season 7, cause it looks like Kit and Emilia's offscreen friendship will translate to onscreen chemistry.  More photos after the cut
Post a Comment
Read more

ENTERTAINMENT: CHECK OUT KERI HILSON FIRST EVER PHOTO ON HER INSTAGRAM PAGE AFTER TWO YEARS 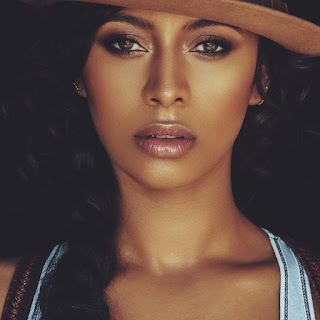 The beautiful Ms Keri Hilson who has been away from the public arena for quite a while now is making a come back gradually. After the release of her last studio album, No Boys Allow, in 2010, Ms Keri baby, stepped out of the entertainment scene to immerse herself in everything love and dovey with her boyfriend NBA star, Serge Ibaka, but after the messy breakup that drained her energy, she is making a gradual comeback to the music scene and in studio perfecting her third studio album, L.I.A.R. (Love Is A Religion). The last time Hilson posted anything photo of herself on her Instagram page was in September 2015 and her followers on IG has been begging her since to post some photos on her wall. This is the first photo of Ms Keri on her Instagram page after two years of starving her followers, though she been active on twitter and posted this photo on her twitter timeline on the 1 of June this year but it was the Instagram page her followers wanted her to be more active. So here y
Post a Comment
Read more

RELATIONSHIP: WHY OLORI WURAOLA RAN TO OBASANJO FOR QUICK INTERVENTION 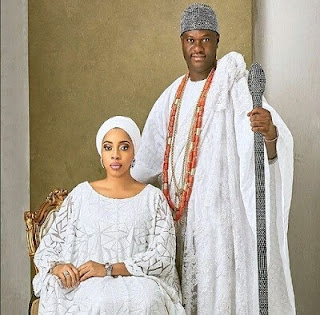 The concept of marriage is far different from that of courtship or dating, we often fantasize marriage to be blissful and glamorous just the way the dating period were. Marriage changes everything. who will believe that Ooni of Ife and his beautiful wwife, Olori Wuraola, will be singing a bitter tone today after one year old marriage. Read the report below to know more: - Alas, one year down the line, the marriage has crashed irretrievably. The well-celebrated marriage has run its full course. While it lasted, they had no child. Inside sources described the marriage as a sham, plagued by suspicion, hatred and devoid of love; they accused Olori of many unpublishable things and lack of commitment to her marital vows. Even as you read she is not on talking terms with her in-laws. The allegations are as wide as they are wild. Back then when Olori Wuraola held sway, she had the world at her feet; she got her wishes at the snap of a finger and she literally ruled the royal hou
Post a Comment
Read more
More posts