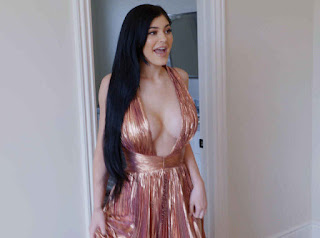 In an exclusive sneak premiere from the recent reality tv show of Kylie Jenner's LIFE OF KYLIE, the reality tv star revealed some sad details why she never went to her high school prom. As kylie Jenner tries on some super sexy dresses as she prepares to surprise a fan, Albert, for his high school prom. Albert was recently  rejected by a girl he asked to prom and later asked Kylie to go to prom with him. In the preview of her new reality show, the star  was asked why she never attended her high school prom and she has this to say. "I was home schooled," Kylie reveals. "It was really sad actually. I had to un-follow all my friends that I went to school with. They probably all thought I hated them but I just couldn't see it, you know, because they would always post photos and they were all at the prom and I was like, 'Can't see it.' It really just made me sad." But she did go to prom in April this year, she surprised her fan, Albert Oc
1 comment
Read more
More posts