NEWS: DEATH TOLL RISES TO 276 IN SOMALIA'S BOMB ATTACK WITH ABOUT 300 PEOPLE INJURED 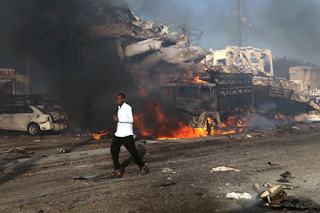 In Mogdishu, Somalia's Capital, 276 has been killed and about 300 people seriously injured in what was recorded as the most powerful bomb blast ever witnessed in the sub Sahara Africa, the country's information minister, Abdiraham Osman said early Monday morning, making it the deadliest single attack in this part of Africa nation. The deadly attack occurred when a truck carrying explosives detonated on Saturday in a crowded street packed with cars and pedestrians near Government ministries and hotels. The information minister, Abdirahman Osman, in a tweet called the attack "barbaric" and said countries like Turkey and Kenya has offered to send in medical aids and relieve. Hospitals were overwhelmed with injured victims and family members who has come to identified loved ones Angry protesters were seen gathered near the scene of the attack, the Somalia's Government has blamed the attack on the extremist group, Al-Qaida linked Al-Shabab for what was call
Post a Comment
Read more 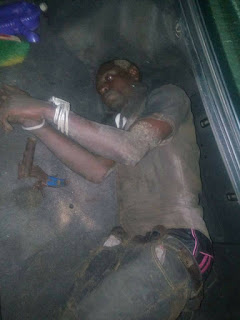 A man who attempted to kill  his mother in Akwa Ibom has been arrested by the  National Security Council of Akpaki Eyo-Abasi  Youth Association at the  early hour of 4 AM on Sunday morning of 15th October 2017 at Anwana Abia lane of Louis Ating street, Oron, Akwa Ibom state. According to online report, the young man has been handed over to the Nigerian Police Force while his mother who sustained major injuries is currently being attended to in the hospital. More photos below;
Post a Comment
Read more
More posts