NEWS: ZIMBABWEAN PROTESTERS ON THE STREETS CHANTING 'MUGABE MUST GO' 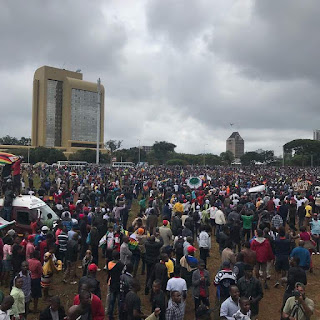 Historical event is happening right now in one of Africa's controversial countries, Zimbabwe, as thousands of Zimbabean protesters took to the streets chanting 'Mugabe Must Go!' The crowd was seen gathered at the centre of Harare calling for the resignation of Robert Mugabe. The rally is hugely supported by the army and members of the ruling Zanu-PF party. War veterans who until last years were supporters and loyal  to the President are also saying the President must go. Robert Mugabe, 93 year old who has been ruling Zimbabwe for over three decades (37 years to be precise) has been under house arrest since the military took over government in what was called a bloodline takeover on Wednesday 15 November 2017. But he made his first public appearance on Friday 17th of November since the historic takeover and he spoke only to open the graduation at a university of which he is the Chancellor. The thousands of protesters who took to the streets calling for the resig
Post a Comment
Read more
More posts