ENTERTAINMENT: BEVERYLY NAYA HAS THIS MESSAGE TO GET ACROSS Y'ALL 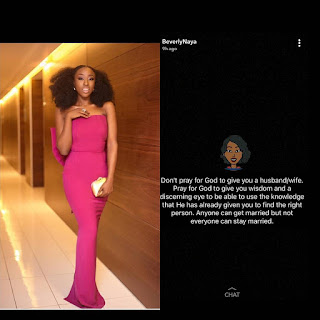 The sultry actress has this to get off her chest: - "Anybody can get married but not everybody can stay married."
Post a Comment
Read more 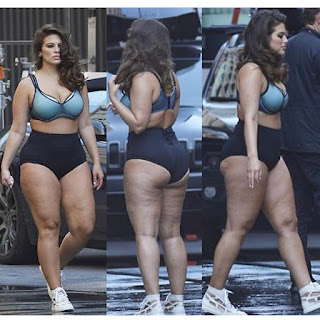 Not everyday one sees this type of curves on a woman, especially when she is proud of her big bones but Ashley Graham is surely a bold and beautiful woman who flaunts all her goodies bag. More Photo of her after the cut.
Post a Comment
Read more

ENTERTAINMENT: LUDACRIS' WIFE SHARES 40 REASONS WHY SHE LOVE HIM ON HIS 40TH BIRTHDAY 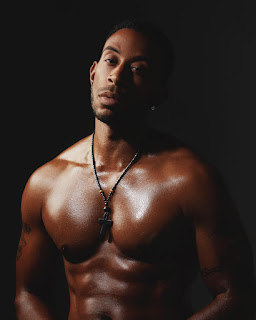 It's not even Thursday yet and so much love is in the air today. Rapper Ludacris' wife, E duoxie Bridges, shared 40 reasons why she loves her husband on his 40th birthday. Here is what she posted on her Instagram page:-  40 years of fine! Happy birthday to my loving husband. I thank God for you every day. 🙏🏾❤️ 40 reasons why I love you. 1. Your love for your family 2. Your leadership 3. Your humility 4. Your ability to light up a room and make everyone feel loved 5. Your patience 6. Your love for all of your children 7. Your courage 8. Your strength 9. Your love for the world 10. Your work ethic 11. Your pure spirit 12. Your enormous heart 13. Taking great care of our family 14. Making sure we never go without 15. Your passion in trying new things 16. Your love for traveling 17. Your sensitivity 18. Your talents 19. You are goal oriented 20. Your generosity 21. Your sense of humor 22. Your friendship 23. The way you make me feel so loved every day 24. Your loyalty 25. Yo
Post a Comment
Read more 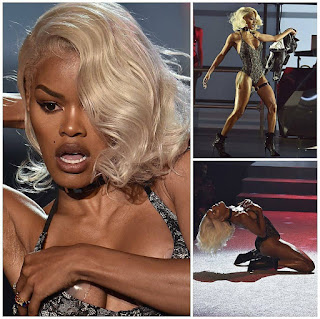 Y'all remember the girl from Kanye West's music video, Fade? Well, if you are not in the know yet, know this now, her name is Teyana Taylor, wife to NBA star, Iman Shumpert, mother of one, dancer with killer moves. Well, i guess that's enough title for now. Teyana Taylor got herself on the runway and lit up the whole of New York in the New York Fashion Week, dropping low for the catwalk and putting all the classic runway models in the box. Future performed live on stage while Teyana dropped those killer moves that faded Kanye West's music video. Her NBA star husband, Iman Shumpert was in the building and was super proud of his wife, even posted photos of her on his Instagram page. More photos after the cut.
Post a Comment
Read more

ENTERTAINMENT: LIONEL MESSI HAS GOTTEN HIMSELF ANOTHER INTIMATE TATTOO OF HIS WIFE'S LIPS 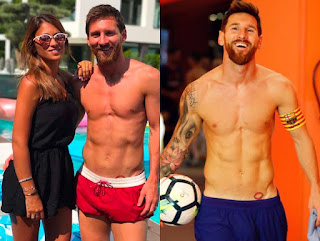 Football god, Lionel Messi has gotten himself a brand new ink of tattoo in a very private place intimating his love for his beautiful wife, Antonella and guess? It is the tattoo of his wife's lips near his groin. Wonder what he is trying to tell us with that picture, anyways, the young man is clearly in love, gbam!!!
Post a Comment
Read more 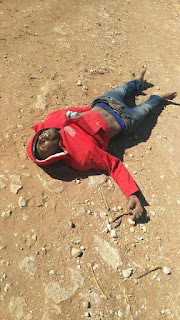 This gruesome photo of a young Nigerian man found dead by the roadside in South Africa after allegedly arrested for not having his passport. The photos were shared by a Facebook user with the name Lordskarly Ebubedike and with the caption: - R.I.P TO U FRANK. A YOUNG MAN FROM OKIGWE IMO STATE NIGERIA , WHO CAME TO HUSTLE IN SOUTH AFRICA AND THE POLICE ARRESTED HIM LAST NIGHT FOR NOT HAVING HIS PASSPORT , WE ALL FIND HIM DEAD BY THE ROAD SIDE.IS THESE THE BEST WAY SA POLICE ??? .WE ARE ALL CREATED FROM THE SAME FLESH INCASE ATLIST ALL AVERAGE NIGERIANS PAID FOR SOUTH AFRICANS FREEDOM DURING THE SCHOOL DAYS. IT WAS CALLED MANDELAS FEE'S.SO IS BETTER THAT YOU SEND THEM HOME THAN KILLING.MAY YOUR GENTLE SOUL REST IN PEACE AMEN.HAVE YOU EVER HEAR THAT A FOREIGNER WAS KILLED BY A POLICE OFFICER OR BY ANY UNIFORM MAN IN NIGERIA BEFORE ???.PLEASE TOGETHER WE CAN MOVE AHEAD $$$$TMT$$$$.
Post a Comment
Read more

NEWS: ACTIVISTS BURN COFFIN IN LAGOS TO PROTEST AGAINST THE NIGERIA'S SEPARATION 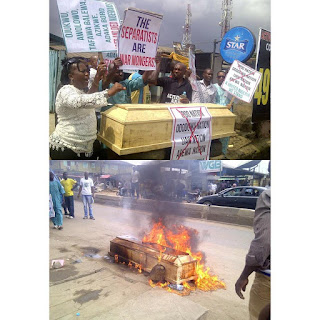 This happened today in the megacity, Lagos, as activists who are against the separation of Nigeria and supporters of its unity took to the street to show what they flagged as "The Sepaaratists Are War Mongers" burned a coffin in the process.
Post a Comment
Read more

NEWS: SEE THESE PHOTOS OF KANO YOUTHS ROCKING THE IDI IGBO ATTIRE AS THEY CELEBRATE EID-EL-KABIR 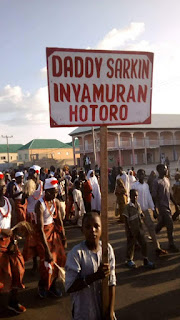 Nigeria is one hell of controversial country at the moment and when one is about to make some staggering conclusions or take a stand, you get hit in the head either by the humor of the people or critics. But whatever the case, you just have to give it to this multi-cultural group of talented group call Nigerians. A twitter user with the account "Aminu Zimit" shared this inspiring and humorous photos on his twitter page of Kano youths as they dressed themselves in Igbo attires as they celebrate the Eid-el-Kabir two weeks ago.More photos after the cut and caption:- "KANO Boys celebrating #Eid wearing #Igbo attires....over to #Kanu. We are accomodating, loving and peaceful people @DrDamages @SaharaReporters
Post a Comment
Read more 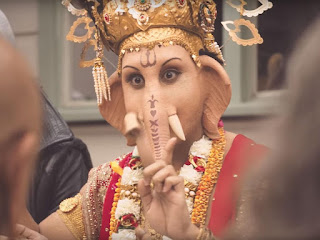 An official complaint has been laid by India over the what they tagged "offensive" lamb advert by Australian advertising company promoting the country's lamb produce and the depiction of Hindu god eating meat. The high commission of India in Canberra has made a demarche to Australia’s department of foreign affairs and trade, the department of communication and arts and the department of agriculture over the advert. The Consulate General has further contacted the company responsible for the advert to withdrawn the content. The company behind the advert is  by Meat & Livestock Australia (MLA), the content of the advert contain number of religious figures sat around a table together enjoying a lamb dish. The religion members in the table are Jesus, Moses, Buddha, Aphrodite, and Ganesha, alongside an alien figure and Scientology leader L Ron Hubbard. The Prophet Mohamed is unable to make it, the party is informed. The organization behind the advert(MLV) has no
Post a Comment
Read more

RELATIONSHIP: MAN MARRIES GIRLFRIEND AFTER 8 YEARS OF FRIENDSHIP AND 7 YEARS OF LOVERSHIP 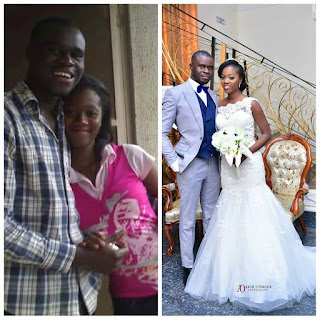 The journey of love is a trip full of potholes and corner corner and only few have the courage to embark on such mystery adventure. This right here is the story and journey of two friends @funmilayo_ayobami and @boyoo4 who later became lovers for 8 whole years and today are united in holy matrimony. Don't get it twisted, love is a beautiful thing (In the voice of D'banj) More photos after the cut.
Post a Comment
Read more

A final year student, Imo Ekanem, of the Department of Mass Communication, Uyo City Polytechnic, Nduetong Oku, Uyo, Akwa Ibom State was shot  by a policeman on Saturday over the victim’s refusal to give N100 bribe. Punchng gathered that  Ekanem was shot dead by the policeman at his hometown, Nkek, in Ukanafun Local Government Area of the state on Saturday, while he was on errand using his mother’s motorcycle. Read more
Post a Comment
Read more

ENTERTAINMENT: CHECK THIS COMPARISON OF BIBLICAL JESUS AND MODERN JESUS 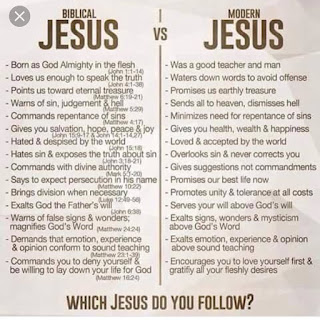 Controversial OAP, Daddyfreeze shared this on his Instagram page, the difference between the biblical Jesus and the modern Jesus. Do you guys agree with this? Daddyfreeze also went ahead to describe what the world would have called Jesus Christ and His Discipline if they had lived in this modern day. Read what he wrote below:- They would have called him daddy 'G' hoe, contributed to buy him an aircraft and his disciples would have lived in absolute luxury, a departure from what the Bible says was the case, as depicted in the verse below! ~FRZ - 1st Corinthians 4:[11] To this present hour we are both hungry and thirsty, and are poorly clothed, and are roughly treated, and are homeless; - HOW THE APOSTLES DIED.. . . . . WHAT YOU MUST KNOW! 1. Matthew Suffered martyrdom in Ethiopia, Killed by a sword wound. 2. Mark Died in Alexandria, Egypt , after being dragged by Horses through the streets until he was dead. 3. Luke Was hanged in Greece. 4. John Faced martyrdom when
Post a Comment
Read more

ENTERTAINMENT: STEVE WONDER BUYS A MERCEDES SUV FOR SON ON HIS 16TH BIRTHDAY AND A LAVISH PARTY 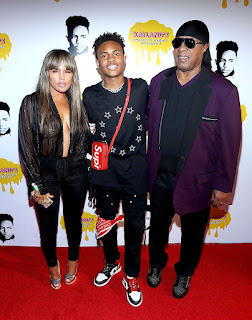 The RnB icon, Steve Wonder's son Kailand, turned 16 years old on Saturday and the his Dad surprised him with a Mercedes SUV at his birthday party at the Belasco Theatre in Los Angeles. The legendary singer lit up the house with the rendition of his famous "Happy Birthday" song before his son's favorite rapper, Travis Scott got on stage for him. Kailand was only two years old when Steve divorced the mother after 14 years of marriage. The lavish party was attended by Kailand's mum, Kai Morris Milla,  Kailand’s 12-year-old brother Mandla Kadjay Carl Stevland Morris.
Post a Comment
Read more 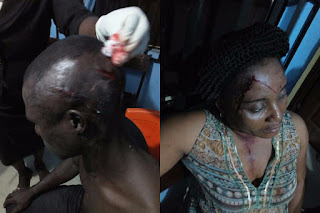 Yesterday, there was news about how the Nigerian army invaded the resident of IPOB leader, Nnamdi Kanu in Umuahia and shot its members, read it here . Now, the Nigerian army has issued media statement denying the attack. According to the statement released by  Major Oyegoke Gbadamosi, Assistant Director Army Public Relations 14 Brigade Nigerian Army, it was members of the secessionist group that attacked the troops. Read the statement below :- "The attention of 14 Brigade Nigerian Army, has been drawn to fictitious news going round especially on the social media that troops have invaded the home of Nnamdi Kanu and killed 3 persons. This is far from the truth. Rather, it was a group of suspected IPOB militants that blocked the road against troops of 145 Battalion while on show of force along FMC-Word Bank Road in Umuahia town, Abia State at about 6.00-6.30pm, today. They insisted that the military vehicles would not pass and started pelting the soldiers with stone
1 comment
Read more

NEWS: HURRICANE IRMA HIT THE CITY OF MIAMI AND THE DISASTER IT LEAVES IN ITS WAKE 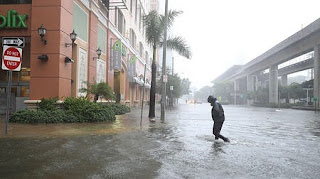 Our hearts goes out to the people of Miami, the sunshine city and the United States as a whole in this time of hurricanes challenges, The sunshine city is being barrelled by Hurricane irma, bringing heaving rainfall and powerful winds, the deadly hurricane which is now a category 2 storm with sustained winds of 100 miles per hour was moving east of Tampa metro area. ABC news has confirmed a fifth storm related fatality early Monday morning after a dead body was found in a home in Shark key  on Sunday. Monroe county, which include Florida keys, has reported two deaths. Hardee county has also reported two deaths so far and one person died in a single vehicle crash in Orange county and at least 27 people were killed in the Caribbean. More photos of the horrible hurricane after the cut.
Post a Comment
Read more
More posts