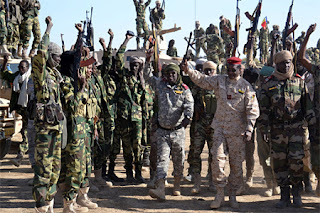 The jihadist, Boko Haram on Sunday killed eigh t CJTF in Kayamla, Borno state, northeast of Nigeria. The civilian militia force at about 5:30am on Sunday were ambushed by the Boko Haram member who were already waiting for them on trees and other strategic places. The members of the militia force were waiting for soldiers at kayamla village, kodunga area of Borno state when the attack happened.  “We lost eight good men in an ambush by Boko Haram gunmen at about 5:30 am (0430 GMT),” said Ibrahim Liman, a member of civilian militia force, in the state capital Maiduguri, which is 10 kilometres (six miles) away. Read more
Post a Comment
Read more
More posts