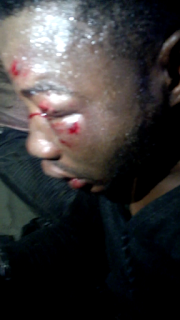 The journey ended for four kidnappers t along Lekki- Epe Expressway last night around 7:30 when they were corned around adeba junction of Lakowe town area of Ibeju lekki Local Government. According to sources from the scene of the incident, four young men rendezvoused a man around Sangotedo of Lekki Epe expressway as she was about to get home. When the kidnsppers abducted her and bundled her into their vehicle and drove off, a strange man who had been observing the scenario from afar noticed what was happening and followed the kidnappers' vehicle, but before they got to Awoyaya the kidnappers noticed they were being followed and decided to step on their accelerator to make a rapid getaway but luck ran out for them when they mistakenly made a maneuver at Davitech filling station close to Adeba junction. The strange man that followed the kidnappers in his Toyota Camry quickly overtook the kidnappers' car and parked in front of them as they bumped into him which brought thei
Post a Comment
Read more
More posts