MUSIC: SISQUO REMAKE OF THONG SONG VIDEO IS THE NEW RAVE IN TOWN 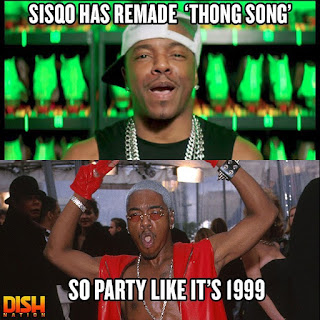 Wow, this is amazing, Sisquo has released a new version of his 1999 hit song, Thong Song and it's banging, all those butts in those thongs. The singer partnered up with Norwegian DJ trio JCY for a new rendition of his hit 1999 single. Though the lyrics are the same, there is a brand new sound and music video. The 41 years old artiste told Buzfeed that "I’ve been asked so many times over the years to make a new version of 'Thong Song' and I have declined every time until I heard the new version that JCY did, I thought it was dope and figured maybe it was time to put some new rims on the Bugatti." Read more.
Post a Comment
Read more 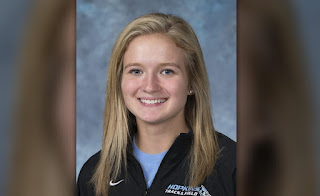 The body of 19 old year Abigail Bastien, a Maryland college student, was found dead outside her apartment building on Thursday, Baltimore police believed the cause of dead was from accidental fall. Abigail, was a rising sophomore and a member of track and field at the John Hopkins University, Officials said after a preliminary investigation that "nothing in this case points toward homicide." "Our early indications, based on all the evidence that we have, which includes video evidence and statements from people, is this is an accidental death where it appears that she fell off the building from quite a distance and died as a result of that," police spokesman TJ Smith said during a press conference Monday. Read more
Post a Comment
Read more 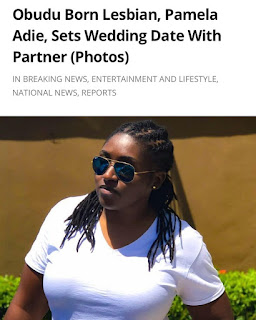 I hope the federal government of Nigeria will attend this wedding sha? Sorry guys, back to the main gist before i get carried away. This beautiful Obudu born lesbian and LGBT campaigner is ready to defy the law as she set date for upcoming wedding to her partner. She announced this on her social media page and the date is 23rd of June,2018. In 2011 Awhobiwom Pamela Adie shocked her family and friends when she came out publicly announcing that she is gay, she used to be married to a man. She left for United States when she was 17 years old to study where she bagged a Bachelor of Business Administration, with a Minor in Personal and Professional Communication. She confessed that she had her first same sex relationship before she left for abroad and remind in that same sex relationship for years. She thought her marriage to a man will save her from lesbianism but it didn't.
Post a Comment
Read more
More posts