NEWS: 'ANYONE WHO TRIES TO ARREST ME WILL DIE, TELL BUHARI - NNAMDI KANU 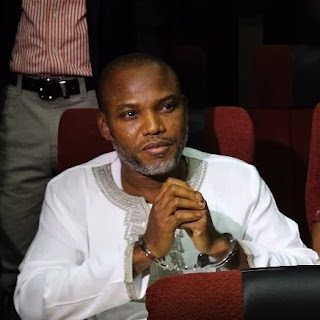 The leader of the Indigenous People of Biafra, Nnamdi  kanu, who spoke today at the Boys Technical college (BTC) in Aba, Abia state, also spoke against the call for the revocation of his bail and arrest. Cableng reported that the IPOB leader, Nnamdi Kanu stated that, whoever dares or try to arrest will surely face the wrath of death. He said: “Where we are, is Biafra Land. Aba is the spiritual capital of Biafra land. We started in Aba in 2015 at CKC (Christ the King Catholic Cathedral). . That day, heaven authenticated our move that IPOB will restore Biafra and that’s what we’ve come to do. We died in Aba; at National High School. They shot and killed us in other places in Biafra land when they were protesting for my release. As our people rest in the grave, we’ll never rest until Biafra is restored. I don’t care what they say in Abuja. I don’t give a damn what they say in Lagos. I’m a Biafran and we are going to crumble the zoo. . Some idiots who are not educated sai
Post a Comment
Read more
More posts