NEWS: AN UBER DRIVER WAS KILLED BY SECURITY GUARDS WHILE ON HIS WAY TO WORK 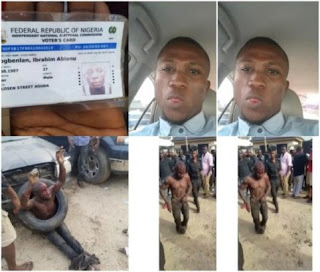 The resident of Ikenne/Eloseh street Surulere were bitter and trolled out to carry out jungle justice to one of the suspects who reportedly killed an Uber driver, Utibe Akpan while on his way to work on Saturday. It was gathered that the deceased, Utibe Akpan was stabbed to death by a security guard identified as Ibrahim Abionu aka Horror, alongside a mechanic. After they killed him, they put in the booth of his car and dropped him in a nearby street, Folawiyo Bankole, before driving away in the car. As luck would have it, one of the suspects was nabbed this morning, he was beaten to stupor and almost killed by the residents who recovered the ID card of Horror on him. He was however saved by the Police as manhunt has already been set on motion for Horror who has been calling his phoning repeatedly to find out if the residents of the area has found out. The third suspect is also on the  run and the Uber car is yet to be found. “Only God knows if the owner of the car, that gave
Post a Comment
Read more

NEWS: THE 17 YEAR OLD GIRL WHO STABBED BOYFRIEND TO DEATH WITH PAIR OF SCISSORS HAS BEEN ARRESTED

This is like in the movies but sadly this one is real life, the sad story of  one Hannah Adesuwa Oaszuwa who stabbed boyfriend, Tomide Akintoye aka life of Tomson with a pair of scissors to death in the fit of rage at Gawon Estate in Egbeda. It was reported that, on Monday morning an argument ensued between the young lovers and Adesuwa who was treated to a lavish birthday party previous days before allegedly stabbed her boyfriend Tomide with a pair of scissors and he died instantly. According to source who spoke the Guardian, the suspect, Adesuwa who reside in Idimu was cutting her hair at the time before the sad incident.   “They had a nice weekend together. They were lovers and the guy celebrated the girl’s birthday. But early this morning, they had a disagreement. The girl was using the scissors when they started fighting,” the source said. “The guy was using his hand to beat her but she used the scissors and stabbed him on the chest. I heard Osazuwa caught her boyfriend ch
Post a Comment
Read more 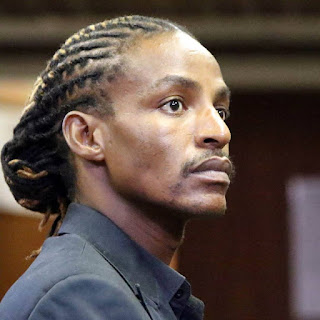 Popular South African singer,  Sipho Ndlovu a.k.a Brickz, might be going away for a while as the singer bags 15 years jail sentence for raping his 16 years teenage relative in 2013. Mr Brickz was found guilty for raping the victim who bled after the incident as her hymen was broken, she was a virgin at the time of the incident. Brickz reportedly threatened to kill her if she told anyone. Passing his judgement Magistrate Baloyi, said the victim who was unaware that she had been infected with a sexually transmitted disease, wanted to end her life as a result of the trauma and became fearful of the musician. Though Brick’s cousel argued for a lenient sentence, however Baloyi said the Kwaito star has not shown remorse for his crime and the court has a duty to protect the freedom of women. Brickz who was all smiles as he walked into court to hear his fate, was first arrested in 2013 after the teenager accused him of raping her in his Johannesburg flat. He denied the charge and the
Post a Comment
Read more

ENTERTAINMENT: SEX ON THE DANCE FLOOR, COUPLES ON HEAT PERIOD GRIND THEIR WAY TO ORGASM 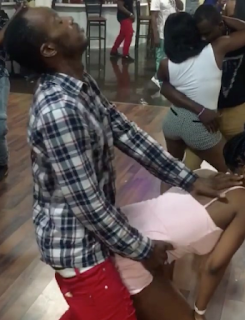 This trending video shows black couples on the dance floor with some seductive moves rocking each other at a party. Clearly  they are on heat period...lol. See the full video below;
Post a Comment
Read more 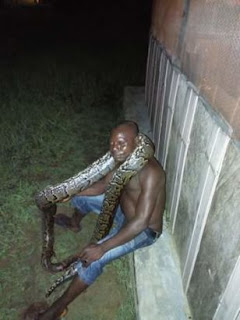 A social media user, Rawpadgin who poses with huge royal python that was killed in his compound shared it on social media and wrote; “This beast was killed in our compound in ogulagha town last night. We were alerted to it wen our dog (bingo) wouldn’t stop barking for minutes.” more photos below;
Post a Comment
Read more
More posts