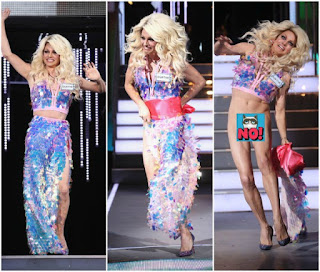 It was an embarrassing moment for UK big brother contestant, Courtney Act who tripped while entering the house at the show's debut on Friday night. The audience were thrilled at an unexpected entertainment as they watch the Australian drag queen penis tucked and taped up! Courtney who identifies as gender fluid and uses they/them pronouns when not in drag looked absolutely horrified as the sequined skirt flew off. MirrorUK reports that it was not the first or only time it happened! Entering the house, Courtney told the housemates all about the embarrassing moment. But it seem like they didn't believe till it happened right in front of their eyes. Courtney went into the along with John Barnes, Jonny Mitchell, Dapper Laughs, Shane Lynch, Wayne Sleep and Andre Brody. See more photos below.
Post a Comment
Read more

NEWS: LUCKY DAY FOR PASSENGERS WHO ESCAPED DEATH AS THEIR BUS RAMS INTO ANOTHER VEHICLE IN ANAMBRA 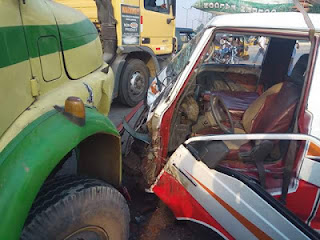 One good news has emerged from the many road accidents that has taken place siince the beginning of the new year. Passengers inside a commercial bus in Anambra state were very lucky when their driver lost control of the bus and rammed into a stationed vehicle. The accident was fatal but luckily enough, no passenger lost a life. Amaka Cynthia, the Facebook user who shared photos from the scene was one of the lucky passengers and she shared the photos with a thankful note. Read what she wrote below and see more photos: "My fellow igboist help me thank God for saving my life from accident. No life was lost."
Post a Comment
Read more
More posts