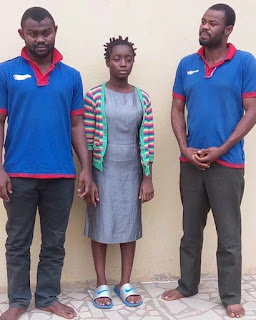 The largest community online is the Facebook community and a lot of its users are taking advantage of this prospect to dupe people on this platform.

The Imo police command has arrested three  Facebook fraudsters who have fake Facebook account alleged to be used to impersonate the Chief of Staff to Imo state Government, Chief Uche Nwosu.

He gave the details of the account used by the fraudsters in duping their victims as: Account Name: Stella Monday, 0242239274, GT Bank and their phone number as: 08175433203 registered with the name Dr Lawson Briggs.

According Enwerem, the suspects posted transactions relating to allocation for lands, award of contracts, fertilizer distribution and employment opportunities and used that medium to defraud unsuspecting members of the public who had a conviction that they were dealing with the real Chief of Staff.