ENTERTAINMENT: ISLAM DOES ALLOW ME TO MARRY 4 WIVES, STOP MEDDLING IN MY AFFAIRS SAYS DIAMOND PLATNUMZ 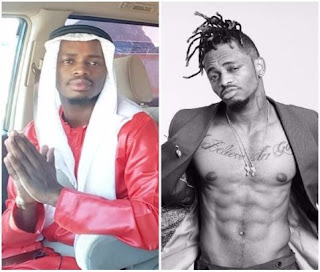 Tanzania singer, Diamond Platnumz has been under pressure lately joggling between two baby mammas, he was recently sued by one of his baby mammas, Hamisa Mobetto for child support and his main partner, Zari Hassan unfollowed and deleted all photos of him from her instagram page. Enraged Diamond will come on social media to vent his anger and told his critics to stop meddling in his private affairs. He said he is tired waking up every day to new stories on the media about his controversial love life.

In a deep message posted on his Instagram page, Diamond made it very clear that he will  be the first person to update his fans when his relationship with the mothers of his children is over, adding that, after all he is 28 years old young man and  not legally married to any of the women yet, also when he decides to marry, his religion allows him to take up to 4 wives. 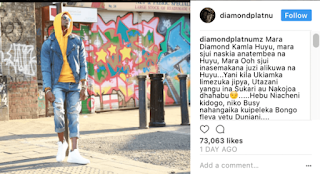 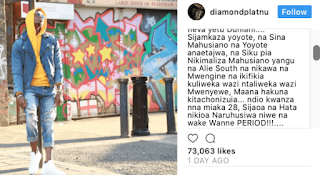 Baby mama Hamisa Mobetto, who had Diamond's son, Abdullatifah Naseeb in August.
Mobetto sued Diamond for defamatory comments he made about her on live radio interview on Cloud FM when he broke the news that he had fathered a son with the model behind Zari's back. She was enraged and accussed Diamond of belittling her by using such defamatory words while alluding to their once secret affair.

Mobetto also accussed Diamond of being irresponsible father and failed to provide for their son for close to two whole months. This is contrary to what Diamonds' version of the story when he confessed to being the father of the child, also said he has been providing child support since conception of the child.