NEWS: LADY WHO TRIES TO SMUGGLES PHONE TO ROBBER BOYFRIEND IN PRISON WAS CAUGHT 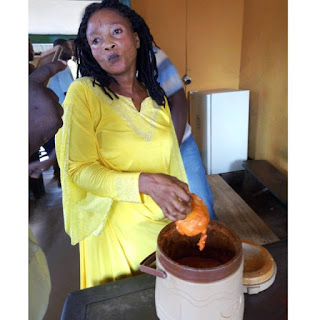 The things we do for love thou, this lady right here tried to sneak in a phone to her armed robber boyfriend in prison and was caught in the process.

A 33 year old woman and mother of two, Fatima Balogun who tried to smuggled a cell phone to her armed robber boyfriend in prison custody was arrested on wednesday by the officials of the Nigeria prisons Service (NPS) in Abeokuta, Ogun state.

The suspect has confessed to have bought the phone for her boyfriend who has been identified as Ganiyu Ajibade. She hid the phone in a wrapped foil paper in the soup that was to be delivered to the boyfriend before the Prison official searched and noticed the illegal item. Fatima Balogun said she is a divorcee with two children before she met Ganiyu two years ago.

The suspect said she lived in Fagba, Iju Saga in Lagos, she added that she had never visited the the prison since her boyfriend was remanded for arm robbery six months ago.

The Controller of Prisons, Ogun state, Comrade, CP Benson Abolade said the action was a threat to national security as the suspect was arrested for trafficking in prison which is against Prison operations.