NEWS: FANI KAYODE REACT TO LIBYA SLAVE TRADE SAYS "PRESIDENT BUHARI IS SILENT BECAUSE MOST VICTIMS ARE YORUBA AND IGBO" 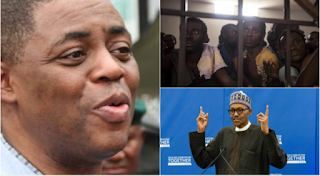 According to the the tweet by former aviation minister, Femi Fani Kayode, most Nigerians sold into slavery in Libya were Yoruba's, Edo and Igbo.

He mentioned that 75% of those sold into slavery have their bodies molested in the most human degrading ways unimaginable and the Buhari's evil regime is silent about the matter because most victims are not from the north.

Here is what he tweeted;

"75% of those sold into slavery in Libya who have their organs harvested, bodies mutilated and who are roasted like suya are from southern Nigeria.

"They are mostly Igbo, Edo and Yoruba. U see why Buhari's evil regime don't care? They are not Fulani herdsmen"- Paul Achalla"