EVENT: YOU ALL NEED TO SEE THIS LONGEST GLASS BRIDGE CHINA JUST OPENED TO THE WORLD 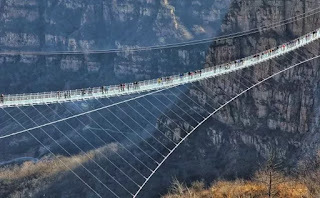 Wow! Is the first word that comes to mind at first sight at this world wonder China just opened to the world.
China just officially opened the longest glass-bottomed suspension bridge in the world. The bridge is located in the Hebei province's of Hongysgu scenic area.
The bridge which is definitely a tourist's attraction spans 488 meter (1,600) feet over a vertical drop of 218 meter (715) feet. Tourists were spotted at the site of the bridge to have the idea of what it feels like to be walking on such a suspended height with the clear view of the earth below.

"Hongyagu suspension bridge marks 2.0 era for China's glass-bottomed bridge" said Yang Mingus, chairman of the Hebei Bailu group, which created the span linking the two peaks at the mountainous region of the northeastern China. See more of photos below: 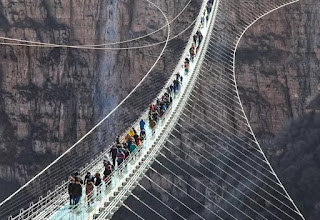 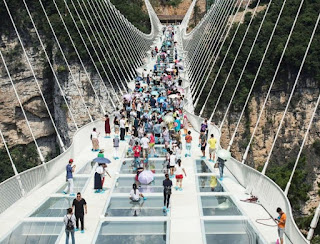