NEWS: STUDENTS SITS ON BARE FLOOR TO TAKE LESSONS IN A COMMUNITY THAT HOSTS SIX OIL WELLS IN DELTA STATE 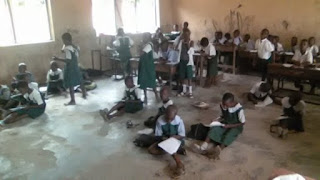 The sight that will welcome you in Otoro primary school in Orhoakpor community in Delta state is one of shock and disbelieve as the elementary school has no single chair despite being a host to 6 major oil wells in that area of the state.

Delta state is one of Nigerian states that has abundant of oil wells and the revenue to the state is in billions of naira, to think that a community in one of  its provinces could not furnish or afford chairs for a primary school in that community is unexplainable and disbelieving as pupils are seen sitting and taking lessons on the bare floor. The photos of the school was taken on Wednesday, January 17, and it exposed the terrible situations of the pupils and poor state of Otoro primary school in Ethiope East Local Government Area of Delta state.

Orhoakpor community which is believed to be hosting six oil wells is the host community but infrastructure and educational facilities are extremely lacking and poor as the roofs of the building are almost blown off which exposes the pupils to danger and hash weather conditions. And that is not all, the pupils are sitting on the bare floor to take their daily lessons. The classrooms lacks doors and windows and neither are there staffs rooms for teachers and the head teacher.

A source within the community who wanted to remain anonymous appealed to the Delta Governor, Arthur Ifeanyi Okowa to come to the aid of the school with the necessary provision of basic learning infrastructures and adequate security for the school.

The photos which have gone viral shown negligence of government in the area of education which should be a top priority in every society. Regardless of the poor attention of the Delta state Government in the community, the presence of the Nigerian Petroleum Development Company (NPDC) opeatomg six oil wells in that community is not felt by the people as there are no access roads to the school and no portable water supply as well. The health care condition in the community is another pitiable situation as the only health centre in the community does not have the basic medical facilities. See more photo below: 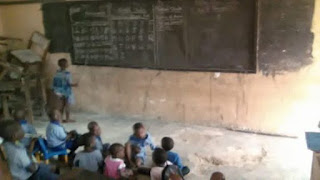