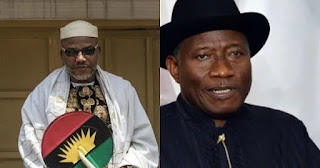 Nnamdi Kanu, the leader of indigenous people of Biafra has slammed the ex president Goodluck Ebele Jonathan as the head of the problems they are facing now in Nigeria.
He gave an exclusive nterview with Daily Sun where he described the ex president as being weak and incompetent president who did nothing for the south east even though the region claimed him as their own.
Read More