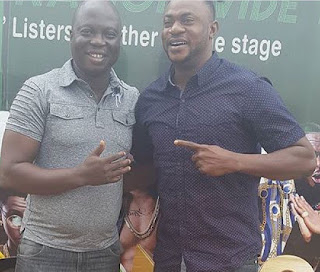 Actor Odunlade Adekola and Mr Lain escaped death from the spray of multiple bullets shot at their car from arm robbers.

The two Nigeria actors, Bolaji Amusan popularly know as Mr Latin and Odunlade Adekola were attacked on Saturday night by arm robbers. According to report from PremiumTime, they were both returning from a show in Ijebu-Ode, when suddenly their car ran into ambush of arm robbers along Illishan- sagamu road.

Mr Latin narrated the ordeal to PT on Sunday. “We left Ijebu-Ode after the show and heading to Abeokuta, when at about 7.30 p.m. we ran into the armed robbers already stationed themselves on the road,” he said. .

Odunlade was driving ahead of the rest when he sighted the blockade the bandit laid ahead, when he attempted to take a detour, the robbers fired at his tyres causing him to halt. Mr Latin who was driving behind with his colleagues and some aides had to abandon their car and ran into the bush while the robbers chased them with guns. He said they were in the bush for two hours while the robbers searched their cars looting away money, phones and valuable items.

They spent two hours in the bush before they regained freedom after the robbers had left, some members of vigilante group later came to their aide and took them to Ogun state University Teaching Hospital for some medical check up.