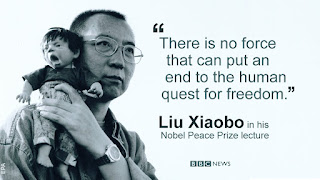 The Nobel Laureate and activist, Liu Xiaobo, who was Chinese most prominent human rights and democracy advocate died age 61 and was serving 11 years prison term for his "subversion" and was recently moved to hospital for terminal liver cancer treatment.

The Nobel Committee said the Chinese government bore a "heavy responsibility for his premature death".

The Nobel Laureate, Liu Xiaobo died peacefully in his sleep surrounded by his wife and relatives and his last word to his wife, Liu Xia "Live on well"  the South China morning post reported.