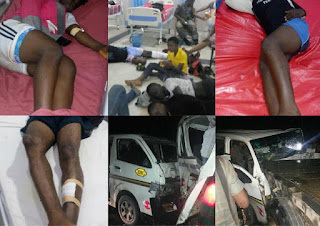 A fatal accident of bus conveying 27 Rivers State athletes rammed into a stationary truck along Emohua last night as they were returning from the just concluded sports festival in Ilorin, Kwara state.

One of the injured victim, Bright Emmanuel, a cyclist who won one of the two gold medals the state hauled at the event, stated that it was case of over speeding as the bus rammed into a stationary truck parked along the road.

Being that they were in a convoy, a second bus also rammed into the first one that rammed into the trailer. Several athletes got injured including Sgt Momoh Rahim, team Rivers security personnel, whose left leg could be amputated.