NEWS: TURKISH FATHER LIVESTREAM HIS SUICIDE ON FACEBOOK BECAUSE HIS DAUGHTER MARRIED WITHOUT HIS APPROVAL 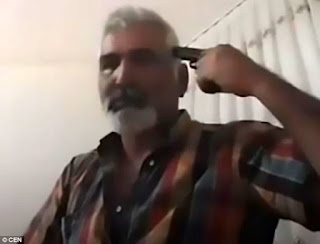 Sad news of distraught father who live streamed on Facebook his suicide because his daughter choose to marry without his blessing and approval.

In the heartbroken and emotional video that now emerged on social media, Ayhan Uzun, the distraught  father was seen speaking to the camera while calling on his family for the wedding which he didn't bless. As Ayhan Uzun from Kayseri, central Turkey unleashed the horrifying video to his family, he held a hand gun to his head.

In the  video he  said "I am livestreaming tonight, and it is my will, i do not want the  people that put me in this position to attend my funeral"

Ayhan Uzun who was alone at his home, revealed that he  only knew about the daughter's engagement via telephone call.

He said "On my daughter's happiest day, they called me and said to me, father come have a treat.  Nobody asked about me, nobody treated me like a man. My father in-law took my place and without having the right he approved my daughter's wedding. Nobody said that this girl's father is alive. Though i would have waited for my daughter and family to say to me, 'come father, be with us'"

He added "My wife called me and told me, i said to her, why didn't you come and tell me and she said 'we cannot make a personal visit to you' .....Maybe some of you will call this a show, i do not want anybody to go through this thing i am going through. A little later i will put an end to my life with the gun i am holding in my hand"

During the live-streams, his friends and family were begging him not do it, some strangers  clicked liked on the  video. But at that point Mr Uzun has made up his mind and took no notice of pleas from his loved ones.

In the footage, Mr Uzun collapsed to the floor after shooting himself, though this has not been independently verified, his family and friend quickly rushed to the house and found his dead body on the floor. The police have launched investigation and his body has been taken to the morgue for autopsy.