NEWS: A FAILED ATTEMPTED COUP IN EQUATORIAL GUINEA HAS LED TO THE ARREST OF 30 ARMED MERCENARIES 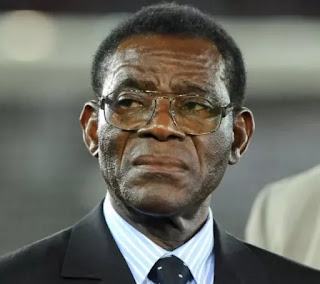 Mr Nicholas Obama Nchama who is the minister of security in the country said radical opposition parties had recruited mercenaries to overthrown the government of President Teodoro Obiang Nguema, who has been ruling the country for nearly 40 now.
Minister Nicholas said the coup had. been foiled with the help of the Cameroonian security services. The alleged mercenaries from Chad, Cameroon and the Central Africa Republic (CAR) were found with rocket launchers, rifles and large amounts of ammunition.

Teodoro government has been labeled a regime of  corruption and human rights abuses. An infamous failed coup attempt was led 14 years ago by former British soldier Simon Mann. The former commando and businessman was arrested in Zimbabwe in 2004 and extradited four years later to Equatorial Guinea, where he was sentenced to 34 years in prison. But one year later he was released after receiving Presidential pardon.