NEWS: GANG OF MEN WHO RAPED TEENAGER AT GUNPOINT HAS BEEN ARRESTED IN DELTA STATE 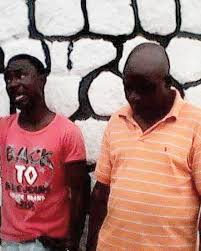 Evil prowlers and the notorious rapists, Ejima Odita and Ifeanyi Iloba who were reported to have raped a teenage girl at gunpoint have been apprehended by the Asaba Vigilante Corp.

The suspected arm robbers who have been masquerading as chairman and members of the vigilante corps while robbing their victims were arrested on the 8 July after some of their victims reported their activities to the authority.