ENTERTAINMENT: WHO WILL BETRAY DAENAERYS THIS TIME AROUND? 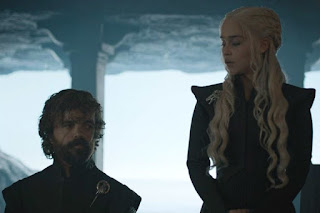 The excitement of Game of Thrones is slowly dragging to it peak moments as all kinds  of unexpected secrecy and suspense are unfolding but what every fan of GoT is waiting for now and asking is, will Tyrion be the one to betray Daenerys next? This is the question weighing on the minds of fans of GoT.

In the HBO series, it was foretold that Daenaerys will meet three betrayals, one for blood, two for gold and the third for love. The first which was for blood when the witch, Miri Marz Durr, tried to revive Drogo, the second was for gold, when Jorah Mormont was hired by King Robert to kill Daenerys in season 1. So now, who is going to be third betrayal?