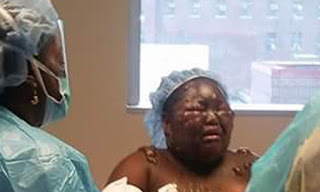 The story  of the girl who suffered second degree burn over her face and shoulders when poured hot water by her friend in a battle of prank gone horribly wrong. Said the police,

The  12 year old  girl behind the incident has tried to kill herself, her mother told this to the Daily News inside the Bronx apartment where the incident occurred.

“My daughter tried to stab herself with a knife,” said mom Shernett Panton, 34, on Thursday. “It was a prank — not a good prank. But after she saw what she did to (Jamoneisha) was really wrong, she tried to kill herself.”