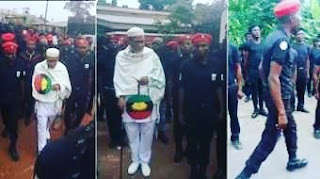 President Muhammadu Buhari in a closed door meeting with the Chief of Defence Staff, Abayomi Olonisakin, has revealed the issue of the alleged Biafra Secret Service, Boko haram, Kidnapping and quit notice were among the many issues plaguing that country  that were discussed in the meeting  with the service Chiefs.

The Chief of Defence said, the president has given some directives including the tackling the threats, which will be carried out by the military and securities agencies very soon.

The meeting which lasted three hours between the President and the national security chiefs in the presidential villa in Abuja. Olonisakin said, Buhari was briefed on the issues of Biafra agitation, Boko Haram, quit notice among many other issues causing menace in the country.

“We have been meeting with Mr. President for the last three hours. We updated him on all security issues around the country, within the country and outside the country, where our troops are.”
“Of course, we have just updated him because he is aware of what’s been happening. He has been receiving regular briefings from the acting president and he has also been going through the print media and electronic media to follow the happenings in the country.
“After the meeting, he has directed on some areas we should look at so as to enhance our operations in the country.”
“The issues of security, every security threat, all security threats were treated one after the other ranging from terrorism to kidnapping, herdsmen/farmers clash, to IPOB issue.”
“In his address to the nation, he talked about the unity of the nation which is non-negotiable. We have all been fully instructed to ensure that that directive is carried out to the letter,” he said.
“We are going to enhance our operations in all the areas we need to do that. Like I said, he has given the necessary directives which will be carried out by the military and the security agencies.”


The National Security Adviser, Retired  Maj.-Gen. Babagana Monguno, Director-General, Department of State Security, Alhaji Lawal Daura and all the Service Chiefs were among the people that  attended the meeting. 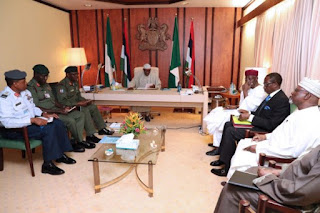