NEWS: TEEN THAT DEFENDED HIS MOTHER DURING A VIOLENT ATTACK ON HER HAS BEEN CHARGED WITH MANSLAUGHTER 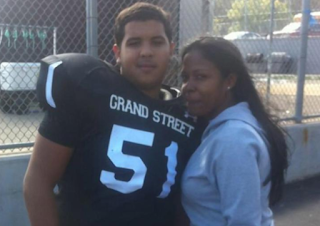 A Bronx kid by the name Luis Moux is been charged with manslaughter for choking his mother's ex boyfriend to death after walking in on her attack.

According to the reports of NY post, the investigation by the police confirmed that Luis' mom Lorena Sesma and her ex boyfriend, Stanley Washington were arguing in the hallway of their building before Stanley followed Lorena into the apartment and began beating her violently. Luis, who was in his room then heard the cry of his mother and quickly rushed out to help her, wrapped his arms around Stanley's neck and began choking till he gave out.

Though Luis had no prior record of arrests, but details are still unclear if his intention was on impulse after he couldn't stop Stanley from hitting his mother. Police has also confirmed that Stanley had 26 previous arrests and 2 were of domestic violence.

SLUSHGUY said…
Would have done same