NEWS: NNAMDI KANU IS IN LONDON, HE FLED THROUGH MALAYSIA - ORJI KALU 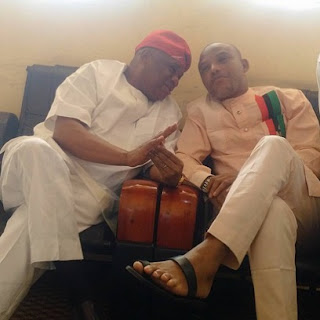 Former governor of Abia state, Orji Kalu said that the IPOB leader, Nnamdi Kalu is currently in London, that he fled through Malaysia.

Ex Governor kalu, made this disclosure in an interview granted by Sunday Punch, he said that the Federal Government outlawed the activities of the IPOB because of its leader, Nnamdi Kalu ignored elders's advises. He also added that he doesn't know the whereabout of Nnamdi Kalu's parents.

He said contrary to public believe and what has been circulating in the media, the military did not take Nnamdi Kalu and his parents into custody, Orji Kalu told Punchng;

“Kanu was not taken away by the military. Kanu went to Malaysia from where he travelled to the United Kingdom. Nnamdi Kanu is in London right now as we speak.
“He was not arrested by anybody. He left the country on his own.
One of his relations has spoken to me and explained everything because I wanted to see him and talk to him wherever he was and see how I could meet some Federal Government officials on his issue.
“I also wanted to see ways of talking to the President about him, and find common ground but his family told me that he has left the country, unless they are lying to me.
“I believe, whether he had left the country or not, he is not with the military because I asked the Commander of the 14 Brigade, Brigadier General A.K Ibrahim, who is a very fine and good soldier, well educated and dedicated, and he told me that they don’t know his whereabouts and I am sure, the Department of State Services have the same information.
“I also visited the Commissioner of Police and he said he didn’t know his whereabouts and that they are also looking for him.”

On the whereabout of Nnamdi Kalu's parents, Orji Kalu said;


“I don’t know.
“I visited them in December last year and I was not impressed with the discussion I had with the father and the mother because I expected them to have acted better.
“Since then, I have not visited them.
“I feel that they have not impressed me because they ignored my advice to them to talk to their son on the need to stay at home and avoid public outings. I said his people can continue to carry their flags around but that they should not disturb anybody again.
“They have a right to express themselves but that such rights should be within the limits of our constitution.
They have the right to carry Biafran flags but they should do so within the limits of the constitution. Once your activities are within the limits of the law, you are in order.
“You cannot carry Biafra flags and be stopping vehicles and smashing their windscreens.
“You cannot carry Biafra (flags) and be raping young girls, you also cannot carry Biafra (flags) and be assembling young men every day.
“These are people who have no job and after doing that, they will go and engage in kidnapping or they will go and do armed robbery while some will go and do other things to make money.
“Hunger is a very terrible thing.
“The traders in the market have warned them to stop the nonsense they are doing. Why should you be extorting money from people in the name of Biafra agitation?
“They are extorting money from people in the market against their will.
“If the federal and state governments continue to watch and allow all these things to continue, there will be chaos in the state.
If Kanu had not proved stubborn but listened to advice and kept to the rules of the court, we won’t be where we are now.”