NEWS: ONE OF THE MATHAROO SISTERS WAS ARRESTED IN ITALY ON INTERNATIONAL ARREST WARRANT 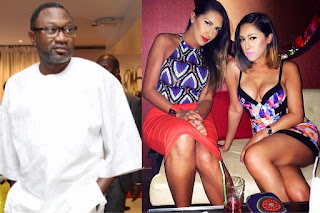 According to report, one of the Matharoo sisters was arrested on international arrest warrant at the Marco Polo airport in Italy on Wednesday.

Kiran Matharoo was caught in Italy as she disembarked a flight at venice's Marco Polo airport in Italy. It's believed the arrest was related to alleged sex torture case against Kiran and her sister, Jyoti in Lagos.

In December of 2016, the Canadian duo were arrested on allegation of blackmailing wealthy men with obscene sex tapes and libeling them through their website, Naijagistlive.com. At one point, rumors has it that they have allegedly swindled 274 men.

One of the alleged victims was Nigerian oil billionaire, Femi Otedola. But the sisters denied everything, blaming it on the Real Housewives of Lagos for their trials and tribulations. They were later granted bail which they jumped and fled Nigeria, making them to be declared most wanted.