THE NIGERIA I NEVER KNEW: UNTIIL NOW (A NIGERIAN IS NIGERIA) 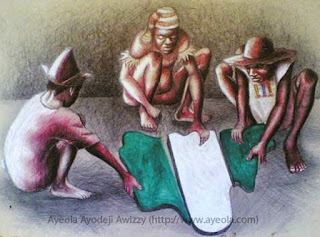 Like a child born in the early eighties, I know nothing of the political or economic dynamics of that time and growing up in the nineties, I was in awe with music, books, cartoons and Chinese movies, always wanting to do well in school to impress my father, always learning the trending music and fashion to properly socialize and show off to my friends in school and the birthday parties on the weekends. These were the things I remember mostly growing up in the eighties and the nineties, not politics or culture or other stuffs related. Even with all the military notoriety and failed elections occurring, as a kid none of that matters in your daily activities, so later years when I discovered Nigeria-Biafra civil war on my own, when I accidentally stumbled on this historical pebble, I felt cheated and gravely angered, the type of anger that have imaginary hands torn at your clothing, like I was suddenly left naked outside in the blistering cold. My anger wasn’t because of the horror I found between the pages of those enigmatic books I read, it wasn’t about the lame politics our forefathers indulged on, it wasn’t also because of the genocidal agenda, all that will be reviewed later on but my anger simply was of being robbed of my rights, of never being told or taught in school. None of my teachers both in elementary and secondary school even to my university days, was there any significant elaboration of this gigantic history of my country, Nigeria. I felt like some episodes from my life were missing. Growing up, the story being told about Biafra then was like a distance whisper, it was like one of those story passively told, like it wasn’t in Nigeria it happened, like a story that happened in one of those America war movies.

I strongly believe that every bona fide Nigerian has the right to learn about this country, the struggle, the cultures, the tribes and most importantly, the civil war that happened. Nothing should be left out, nothing a single strand, in order to forge ahead but we have failed in this attempt. A lot of people think the civil was just a Biafra story but it is not, it is the story of the whole country, Nigeria. The great Chinua Achebe said that, the civil war set us ten years backward. This ten years of our life will never be recovered back.

Who is a Nigerian? Is it the Ibo? Is it the Hausa? Is it the Yoruba? And don’t forget, before you give legitimate identity to these tribes as the only bona fide Nigerians, remember that under this three ethnic umbrella also exist hundred if not thousands of other legitimate tribes. So now let ask the question again. Who is a Nigerian? In an auditorium full of all these ethnic groups in Nigeria, I am quite sure all hands will be raised for a claim and after that is settled, the debate for the majority will arise.
But in my opinion, considering all facts and elements, I boldly and daresay, a Nigerian is Nigeria. If history has taught us anything and if we have learnt or taken a lesson from that history, one ought to call oneself a Nigerian before you call yourself an Ibo or Hausa or Yoruba, because that’s really the true spirit of nationalism and patriotism. To be united under one ideology, under one pillar of unity, under one tribe, that type of strength is formidable and can withstand anything, to cast that tribal or religion sentiment aside. To wear that emblem with such pride and oath. To pledge to serve Nigeria first above all, to swear an oath to be a Nigerian first before you can now say I am also Yoruba or Ibo or Hausa or Alago or Efik or Ibibio or Ijaw or Urhobo or Agatu or Tiv or Idoma or Ijebu or Tsekiri etc.
For thousands of years, all over the world, before the arrival of civilization, before racism, before terrorism, before social media and whatnot, the most oldest and ancient rift has always been tribal dispute. Tribalism. Who were the first here and whose culture should be superior, and sadly up till this present day those elements of tribal supremacy still exist in our society. Human beings will never learn from history. In the holy books, the pharaoh of Egypt did it to the Israelites, the Greeks to Trojans, Britain to Scotland and Ireland, Europeans to Africans and the list goes on. Even when the colonizers came into our land, to Africa, we gave them hospitality but they brought their culture to suppress ours. The war for cultural supremacy is as old as human evolution and I am sad to say, it was this same ancient backward mentality that gave birth to the Nigeria-Biafra civil war of 1967 – 1970. And it is absolutely sad that after over fifty years of that genocidal epidemic, Nigeria has never learnt and yet to learn from its history. It is a disaster.

Nigeria was simply created to fulfill a business requirement; that of supplying goods and services to the Great Britain, this is true in case anyone is trying to contest this, but don’t let me push this fact down your throat, you can do your findings, being agriculturally and naturally potent. Our troubles started when we started proposing for independence, when all over the world the colonial masters were losing their grip on colonization, when Africa using the same tools the colonizers gave them to fight back, when the lids were coming off, when the human race started giving birth to human equality. But the colonizers being obsessed and drunk with powers wouldn’t just let go. They wouldn’t let go without a fight, so with this obsession a concept was created, a concept of indirect ruling of the Africans, to integrate into the Africa continent and marginalize. It is a dubious and treacherous invented ideology of the colonial era but today Nigeria is fifty six (57) years old, Nigeria is all grown with potentials and great wealth, both in mineral and human resources, the greatest weapons of the twenty first century. And the questions still lingering in our minds are, what are the progress we have made in all these years?

Unknown said…
One ought to call oneself a Nigerian before you call yourself an Ibo or Hausa or Yoruba. I could not have said this better myself!
Thursday, 5 October 2017 at 03:08:00 GMT+1