ENTERTAINMENT: BOBRISKY ARRESTED AND DETAINED AFTER HIS GAY STATUS DECLARATION AND CLAPPED BACK AT DENRELE 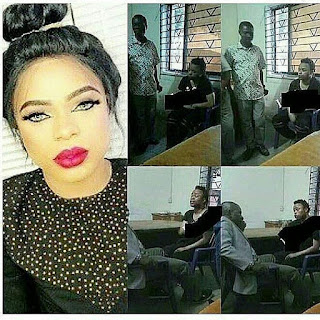 Yesterday was the 7th of November 2017 and the remarkable thing that happened that day was the mild drama between two Nigerian crossdressers, Bobrisky and Denrele.

In Bobrisky's reply which was an indirect clapped back at Denrele's reply to a follower on twitter, Bobrisky officially declared himself as gay. Now, maybe the young blood didn't know  then or maybe he was just too bold for his own good. Following that declaration hours later Mr or is it Miss Bobrisky was arrested by the Lagos state police.

We are here to get full gist of what is currently going down with our new media Queen or is it King but we will surely keep you updated on real time event.