ENTERTAINMENT: JAY Z AND BEYONCE ROMANTIIC DATE A MONTH AFTER THE BIRTH OF THE TWINS 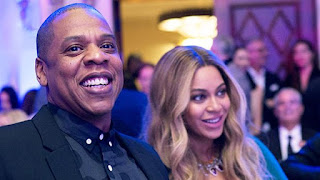 The power couple looked absolutely dazzling as they made their first romantic date 1 month after the birth of their twins, Beyonce, of course looked beautiful as usual  as if she was not the same woman who just gave birth to two bouncing babies a month ago.
According to eyewitness, the couple arrived at exactly 8 pm in separate cars and was surrounded by heavy security guards.
Jay z arrived with their security in an Escalade, the guards first checked parking lot, before Jay Z exited the car. Then a moment later, another Escalade arrived with Beyonce and two security guards. Beyonce and Jay Z left the twins and their big sister, Blue Ivy, with a babysitter and went out for some grown ups fun, they were spotted at Malibu at  the celebrity hotspot on July 12 and the couple looked very happy.